4 Actions That Will Crush the Great Reset 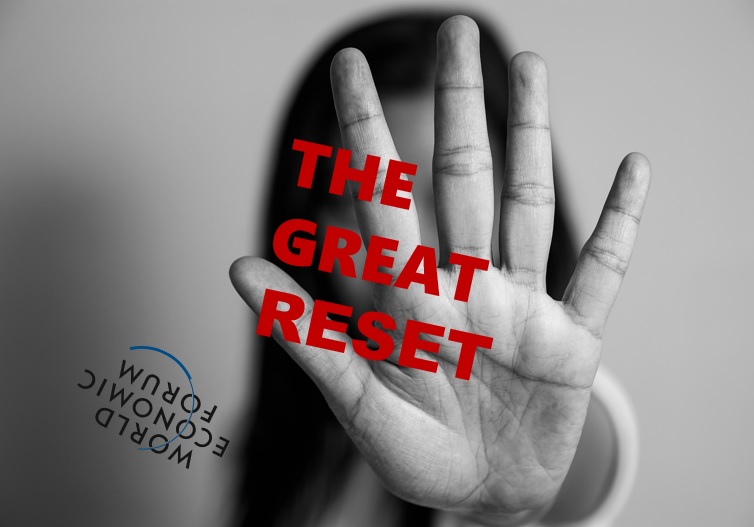 13 Jul 4 Actions That Will Crush the Great Reset

Unless the legacy media is your main news source you know the Great Reset has already shattered many of the freedoms Americans took for granted.

Freedom of speech, property rights, the right to feel secure in your own home, and bodily autonomy have all been violated for the sake of the community.

The Great Reset is an anti-capitalism initiative that uses sustainable development to leverage worldwide political, social, and economic events as a means to transfer control of the world’s economy to a handful of elites.

Their stated goal is to rescue the planet and initiate a new stakeholder capitalism to advance global fairness and equality. They accomplish this through an environmental, social, and corporate governance (ESG) rating system. Through ESG companies are rated on social and environmental issues rather than strictly financial. Their rating effects their access to capital, larger contracts, and the ability to attract investors. Public companies are also expected to report ESG scores for their suppliers and customers. In addition, banks are beginning to apply ESG scores to personal credit, a move that is plummeting the credit scores for otherwise creditworthy customers.

The Great Reset’s sustainable development partnership with the UN expands beyond stakeholder capitalism. It enables both entities to use or even create events like the COVID-19 pandemic to advance local control of medical interventions and decisions.

But the resetters will not surrender easily. In the US thanks to embracing modern monetary theory (MMT), many feel we can print money to support costly programs like Build Back Better, eliminate fossil fuels, and invest in woke companies to encourage their adherence to ESG standards. MMT holds that any nation that can create and borrow its own money, technically can never default on its debt. Therefore, it can print whatever money is needed to support massive spending programs required by ESG. (Of course this is nuts because inflation will destroy the economy long before the presses run empty of ink.)

But the Great Reset is faltering and that is why we must push now.

The strategy I outline has been successful throughout history, in our own founding, and will work now. It is simple but will require some sacrifice and moving in areas that are uncomfortable.

Accept that our rights come from our Creator.

Above all our nation was founded on the principle that God alone is responsible for our rights. If the name God makes you feel queasy then call it nature. But under no circumstances must we believe our rights come from any legislator, agency, or government. That includes children’s rights, parental rights, or even the right to choose to be vaccinated or not.

Our rights come from our Creator, and it is up to us to exercise those rights in ways that do not infringe on the those of others.

Even the Constitution’s Bill of Rights does not bestow rights. It merely codifies the rights our Declaration of Independence declared come from God.

When you surrender to the temptation of government-dispensed freedoms you are binding yourself in chains. Authoritarians like Schwab, Gates and our own growing crop of socialist politicians are afraid of a pious public obedient to God rather than them.

That fear is why tyrannical leaders remove religion from the public square and God from the classroom.

This was a clear attempt to replace the Constitution’s protection of our God-given rights with an authoritarian declaration of frangible human rights subject to the whim of the current elite.

Take a moment each day to appreciate the talents you have. Whether yours is to easily grasp difficult subjects, quickly spot frauds, simplify complex issues so others can understand, or share compassion that helps others to thrive, these are the tools we need to save our country.

Look at God’s role in your life as it is or perhaps as it should be. Seeing God’s work in all things, gives us the strength to succeed. It is impossible to believe in God and all he has blessed us with and fail to realize it is within our power to defeat the self-proclaimed elites of the Great Reset.

But having faith in our Creator means more than clasping our hands in prayer. It means finding the strength to act and taking the first step.

Make it your job to find the truth

Finding truth can be tough.

The CDC often misrepresents their own studies to further false narratives. One report showed vaccines were safe for recently pregnant women, yet the study included less than 2% of the women who were vaccinated early in their pregnancy meaning there was no way to know the vaccine’s effects.

To the contrary, Pfizer’s own documents (P12) show the company’s study excluded pregnant women. However, when 270 women became pregnant during the course of the study, 238 were never followed. Of the remaining 32 pregnancies that were followed, 28 babies died.

The science, facts, and circumstances have not changed. Pfizer’s initial trial data showed their COVID vaccine offered a brief period of protection but failed to stop the virus’ infection or transmission.

Worse Pfizer’s studies show no difference in outcomes between those with natural immunity from prior COVID infection and those who received the vaccine. Young people suffered more severe responses to the vaccine than adults and the often-demeaned claim that the vaccines may compromise your immune system are supported by the drug company’s own data.

From CDC Director Rochelle Walensky’s  March 29th, 2021 remark, “Vaccinated people do not carry the virus, do not get sick,” to Anthony Fauci’s May 17, 2021 claim, “There will always be breakthrough infections, but given the denominator of people who are vaccinated, that`s a very, very rare event,” and Joe Biden’s “pandemic of the unvaccinated,” Americans have been drip-fed misinformation from once respected sources.

Psychologists call the constant flow of mis and disinformation the “illusion of truth.” With sufficient repetition people accept that vaccines are “safe and effective” though few have ever read the data nor seen the proof.

Check both sides of issues to avoid “confirmation bias” in your own research. Many fact-checkers are simply paid by government, biased institutions, or tech giants to further the state’s and legacy media’s “illusion of truth.” Treat them with suspicion and check their sources. Read the scientific studies and not just the results. Often the author’s conclusions that make headlines, do not match the data in the study.

The left has infiltrated classrooms, corporations, Congress, medicine, finance and so many areas of life it is best to learn a specific area that interests you. For instance, how ESG works, the effectiveness of masks, mRNA vaccines for 6 month to 4-year-olds, the wisdom of centrally controlled digital currency, the January 6 trials, election fraud, and so forth.

The more you dig, the more you will discover virtually everything the government says is suspect. This is not surprising since, for decades,  there have been literally no checks and balances on politicians and unelected bureaucrats, by the voters. We have relied solely on campaign rhetoric and an electoral system that daily appears to be severely compromised.

Look for alternative sources of information to expand your understanding.

Knowing the truth can help you protect your property, health, and family.

The purpose of propaganda, wrote French philosopher and sociologist, Jacques Ellul, is not to change people’s minds, but to compel them to “act against their own interest.”

With sufficient fear and misinformation, the state can convince individuals to wear masks that do not work, receive vaccines that may be harmful, or compromise your child’s emotional health through social isolation.

In virtually every aspect of life Americans have been pitted against one another. We must reject this.

When God said to love your neighbor he did not mean only those with whom you agree.

Globalists have spent decades dividing us. If we are to heal our nation, we must first mend the divides.

Reach out to those who disagree with you and try to build relationships by listening with compassion. Have conversations, but don’t always make politics the central theme.

Naturally you cannot interact with everyone. Some are what I call the ‘engineers.’ They thrive on creating chaos and disinformation. These are the instigators, and it is in their best interest not only to ignore your words, but to destroy you and what you believe. Ignore them and move on.

Large numbers of people know something is wrong but don’t know what to do, where to find information, or are afraid to talk to someone for fear of social rejection or job loss. They are having an impact and need encouragement.

Instead of trying to sell your ideas, try to understand theirs. Talk about the things you have in common. Feel how they must feel. Then gradually let others discover how the policies they follow cause the very hurt they are trying to avoid.

Hilary Clinton was right. It takes a village, not to raise your child, but to defeat globalists like her.

Speak the truth every day, everywhere.

Closeted truth has little value in stopping authoritarians. It must be spread and repeated. Lies can never be allowed to stand unchallenged.

History repeatedly shows the worst bloodshed begins when the truth retreats underground. Hitler and Stalin sunk to depraved slaughter only after good people decided to keep silent and tolerate the injustice hoping it would pass.

Despite the anti-gun rhetoric, totalitarians do not fear guns or violence. In fact, they encourage it. Any attempt to overthrow the government would be met with rapid, tornadic force. Martial law would be imposed, travel restricted, gas and food rationed, guns outlawed, and sadly much of society would cede that the government was right all along.

Essentially, the Great Reset would be accomplished in a single blow.

What they fear most is an informed and united public.

Whether in letters to the editor, conversations in the checkout line, or handouts to doctors, in church, at work, or to passersby, lies must be exposed.

A smart friend of mine uses what he calls his “stupid” approach to get others to think. He noticed a rainbow flag in a company he visited and though he knew what it meant, innocently asked the receptionist, “Great flag. What is it all about?”

“What are they proud about?” asked my friend so everyone in the lobby could hear him.

“You mean they fly a flag because of sex,” he laughed as did several in the lobby. The woman was flummoxed and returned to her work.

In a humorous way, my friend spoke up. Keeping the truth alive is the most important  thing we can do.

Whether you use handouts or conversations, continually build your network of connections. Social partners build your own confidence and are a source to share ideas for influencing larger volumes of people. Together we can cripple the advance of totalitarianism.

This quote by O’Brien, the Grand Inquisitor in Orwell’s novel, 1984, best describes the insane quest elites have for human control.

“But always – do not forget this, Winston – always there will be the intoxication of power, constantly increasing and constantly growing subtler. Always, at every moment, there will be the thrill of victory, the sensation of trampling on an enemy who is helpless. If you want a picture of the future, imagine a boot stamping on a human face – for ever.”

Our forefathers found the power to reshape that dystopian future.

Thomas Jefferson wrote that the function of government is to protect our rights and “That whenever any form of government becomes destructive to these ends it is the right of the people to alter or abolish it.”

Now it is our time to abolish this corrupt tyrannical global government.