Even with censorship and de-platforming truth finds a way through. Here is what we know about the vaccines and your health.

The Pfizer ‘vaccine’ never passed its initial trial but was approved anyway.

Pfizer created 2 control groups of about 22,000 people each. The groups were as close to identical as possible, except one was vaxxed and the other not.

Results showed 2 people in the unvaccinated group died from COVID while just 1 in the vaccine group died from the virus. Bingo 95% to 100% effective …except for the part Pfizer left out. All-cause mortality.

All cause mortality is the gold standard of studies. It’s the one figure that counts most because it includes deaths that may have been caused by adverse effects of the vaccine.

Since 14 people died from all causes in the placebo group, it is safe to assume 14 would die in the vaccine group. Except, they didn’t. Instead, 15 vaccinated died during the blinded period.  But that’s not all.  Another 5 vaccine recipients died (p6) after the trial was unblinded and the vaccine was given to the placebo group. We also know most vaccinated died of heart related and sepsis issues, (p12) documented adverse effects of the vaccines.

This means until there are more studies, the vaccine should have been dead in the water. But the trials ended because Pfizer offered the vaccine to the placebo group. Why did the FDA approve this? Because Pfizer issued a statement saying “none of these deaths were considered related to the” vaccines. Poof! Problem gone. No proof,  no autopsies, no analysis, just a one sentence dismissal.

That was good enough for the FDA. But consider Pfizer’s background.

Now consider Pfizer’s motto “We innovate every day to make the world a healthier place.”

Drug trial data is typically made public, especially when you mandate everyone gets jabbed. Not so with the Pfizer trials. Even though it took the FDA just 108 days to do a “thorough and robust analysis” of all Pfizer documents before approving Comirnaty, its turn out the agency wanted 75 years to drip release that same documents to the public.

The 75 years’ time frame was so important, even Pfizer joined the defense to slow-roll the information.

The judge wanted no part of it and demanded faster release of thousands of documents. In the very first batch it was discovered, there were 42,000, serious adverse effects, 75% of which were women, and 1223 people died. (p7) All from the ‘safe and effective’ drug that the CDC kept saying caused no deaths.

The CDC had data showing the vaccines cause serious illness, but said nothing.

Thanks to some digging into the VAERS system by Steve Kirsch, we now know the CDC was fully aware of the dangers of the new ‘vaccines’ way back in January of 2021. They just decided to keep it to themselves. Perhaps along with all that data they got caught burying on 18- to 49-year-olds.

A pulmonary embolism is a blood clot that ends up in your lungs. According to John’s Hopkins:

“A pulmonary embolism (PE) can cause a lack of blood flow that leads to lung tissue damage. It can cause low blood oxygen levels that can damage other organs in the body, too.

A PE, particularly a large PE or many clots, can quickly cause serious life-threatening problems and, even death.”

Let’s look at the data:

Between January 1 and 31, 2021 there were 256 cases of vaccine related pulmonary embolisms. 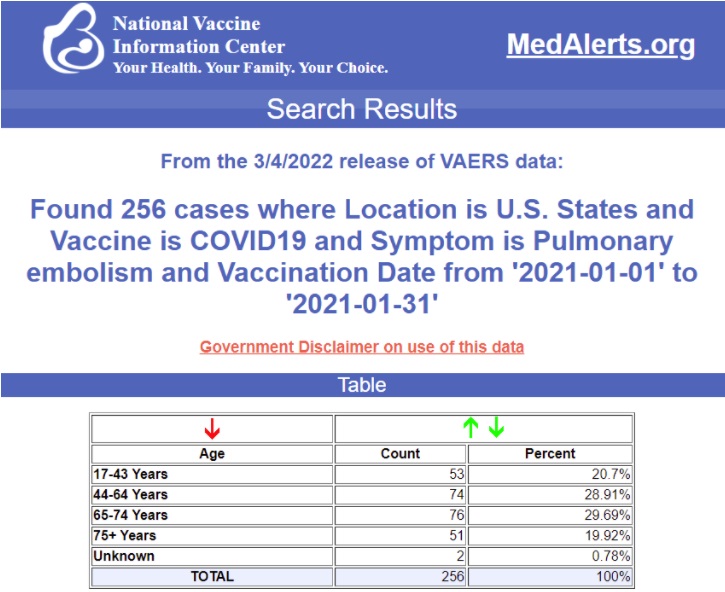 By the end of February 2021, the combined cases of pulmonary embolisms among the vaccinated grew to 685 cases. 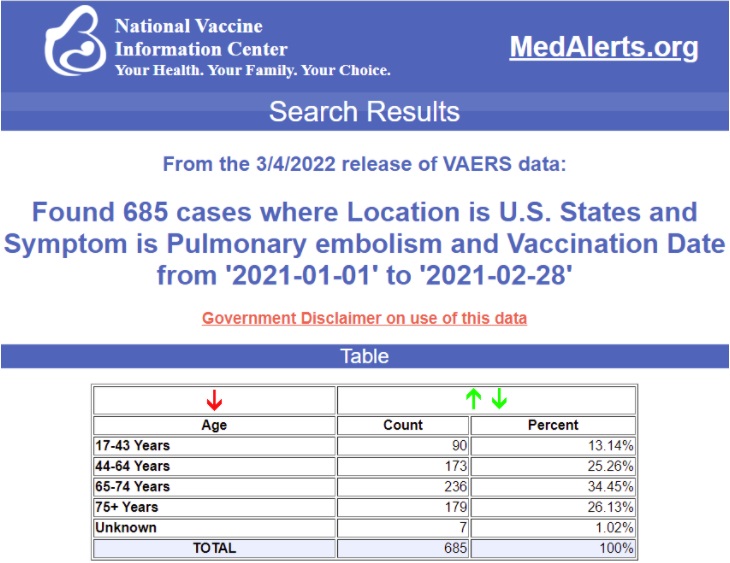 To put things in perspective, during the five years from January 1, 2015, to December 31, 2019 there were a total of 13 pulmonary embolism cases reported to the VAERS system. 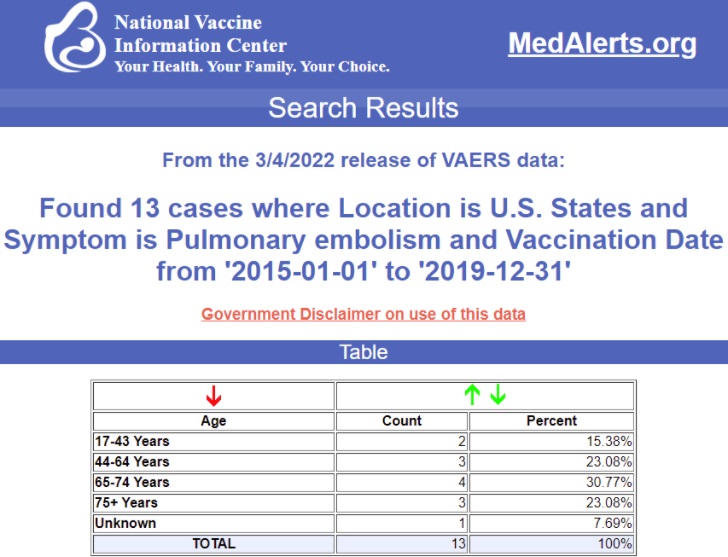 Got it? There were almost 20X as many reported cases of PE in a single month as in 5 normal years. This translates into almost 1000X the incidence of reported PE cases as prior to the vaccines. 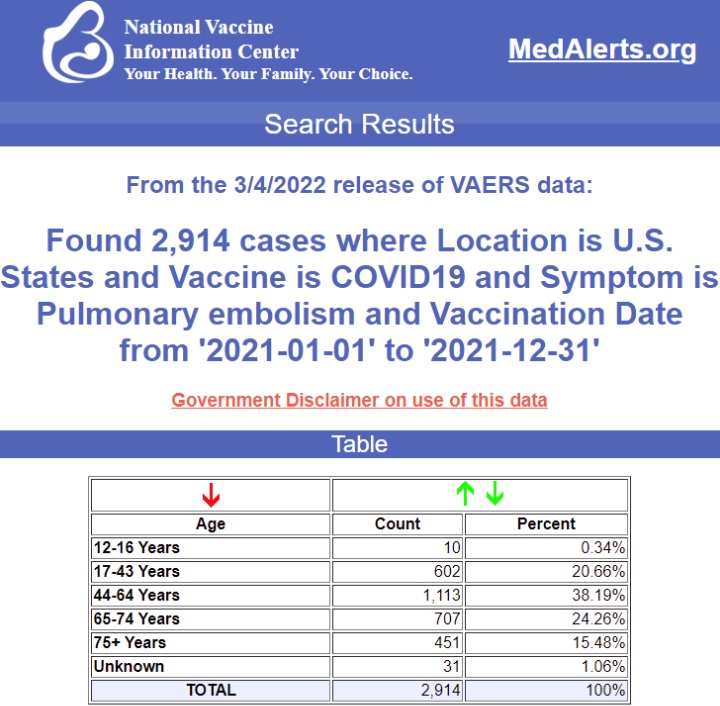 The CDC is quick to say you cannot trust the VAERS data because it is a voluntary system. Anyone can complete the form leading to severe overcounts.  Besides, “correlation is not causation” the CDC notes. (H-m-m. Does that mean the CDC agreed all along a positive PCR test may not correlate to a COVID case?)

Well, causation is proven through autopsies, but the CDC does not perform them. Instead, they require states to perform autopsies under a host of characteristics. Notice vaccine deaths as one of those characteristics? Nope. Me neither.

Rather than VAERS, the CDC relies heavily on a voluntary review of hospital records to create a mathematically derived Rate Ratio the basis of which is unavailable to the public.

As for VAERS being voluntary, data shows while that is true, it is mostly physicians and health professional that complete the forms. In addition, voluntary systems historically undercount cases.  The CDC even inadvertently admitted that of 13 vaccine related hospitalizations among 5 to 11 year olds, just 2 were reported (p1758) to VAERS.

When asked to prove that VAERS overcounts reports, the CDC was silent.

Like Pfizer, they want you to take their word for it.

The truth is in the data. The mRNA vaccines were never trialed long enough to uncover the injuries they caused let alone the deaths. Slowly data from pathologists, life and health insurers, and other nations are showing how dangerous it is to blindly trust those with a record of falsifying information.

A choice between your job or your life is not a decision anyone should ever have to make.