You would never recognize any of these impressive results from the report’s conclusion which reads:

“The study findings do not support the use of ivermectin for patients with COVID-19.”

You can read the full study here.

Let’s dig into the Malaysian study to see how the authors drew this conclusion that contradicts their own data.

Studies and doctor feedback indicate Ivermectin is effective when administered as an early treatment in 1 – 3 days. Yet participants in this study were enrolled in the program up to 7 days after symptoms appeared.

It is interesting this study references others in Columbia and Argentina as examples of no significant Ivermectin benefit. Both studies administered the drug later than recommended and still the Ivermectin performed better than the control groups.

Every study has a main point to prove or disprove, called an endpoint or outcome. There are primary and secondary outcomes. Typically, disease progression would be a secondary outcome versus whether mechanical ventilation was required or if the patient died.  The latter two are specific severe patient dependent outcomes.

But the authors reversed the importance of the outcomes. The primary outcome was disease progression. 52 (21.6%) of the Ivermectin group and 43 (17.3%) of the control patients progressed to severe disease.

This is the bulk of the authors’ argument for rejecting Ivermectin use. As you will see that argument holds less value on closer scrutiny.

From Table 2 you can see 6% of the Ivermectin group died while 23% of the standard care group died. 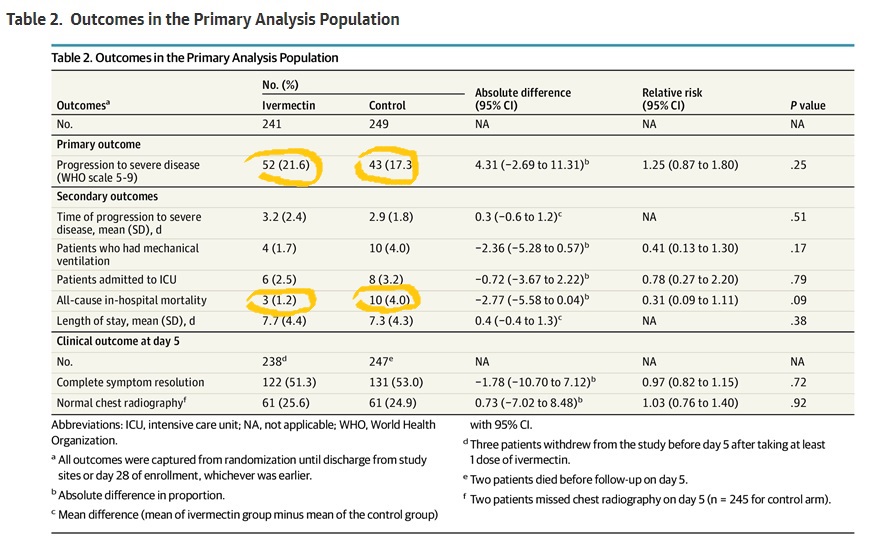 While no measures in this study meet the technical definition of “significant”  the fact remains seriously ill patients were 3X more likely to avoid a ventilator and 3X more likely to come out of the hospital alive if they used Ivermectin, even when administered later than recommended. The worst side effect was diarrhea.

The authors dismiss mechanical ventilation and death outcomes as not significant.

Ivermectin administered to the sicker of the two groups

Buried in the study’s sub-group analysis table we discover the two groups were mis-matched. The Ivermectin group had patients with… 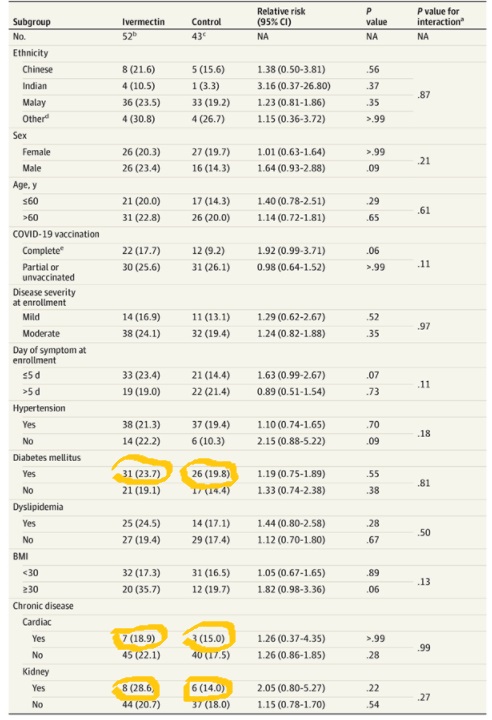 Despite this disparity, the Ivermectin group performed better.

So while there was greater disease progression with the Ivermectin group, we have no idea why it progressed. Each of the patients had comorbidities such as pneumonia, diabetes, kidney disease, and chronic pulmonary disease, all common comorbidities in Malaysia.

Three times as many severely ill people who took the Ivermectin left the hospital alive. To most doctors and  patients that is significant.